All Things Are Connected

The past few weeks have been full of events and achievements for us.

After 13 years in the making, we have finally completed putting together the last part of the BDO druidry course, so we have full courses available online. This last part of getting the druid course together was dogged by setbacks and dramas until the last section of weaving all the threads together in a way that brought all three courses into one conclusion. With that finished, was there time for a rest? No…. As soon as this was completed and presented to the world as an offering, there was a great shift for us and things started flowing of their own accord.

Beltane this year has been one such example.

As the British Druid Order is a global order, it was on my mind that some of us would be celebrating Samhain, in the southern hemisphere, whilst others celebrate Beltane in the northern hemisphere. I decided on the spur of the moment, and late in the day, to go into North Wales for a walk, and while I was there I may as well take some offerings to the ancestors at Moel Ty Uchaf, and while I was doing that, I may as well do a short ceremony…

I felt an urge to invite people in to the short ceremony, so I made a quick video,it was only meant to be a minute or two long but as I was speaking, a new lamb came over to join me. New life stepping into the ancestral space, perfectly illustrating the point I was trying to express.

After this video, I conducted the ceremony in private. I was already aware of an event happening in London two days later, and the upshot of this ceremony was that I was directed to go to East London to listen to Daiara Tukano speaking. To go as a representative of the BDO and to be open to whatever came out of that.

I am not good at travelling, and as this trip would involve 5 different trains just to get there, this was not a mere day out for me, it was daunting! But as I had been directed to go by spirit, I had to go.

This amazing woman is Daiara Tukano who I had the utmost privilege to meet in person.

She is from the Tukano indigenous nation of the Rio Negro Amazonian basin, the first initiated woman into Tukano spirituality, feminist, activist and holds a master’s degree in human rights.

She spoke of many things that are also directly related to what we as the BDO aim to achieve through druidry and our indigenous spirituality. As well as learning much about indigenous Brazilian struggles, I learned how they are changing things, and how they are achieving this through their culture and spirituality, and not gioving in.

She spoke of a paradigm shift.. how do we active that?

Words have power, and the language we use today is that of a coloniser/ conquerer standpoint. It is using the left side of the brain.

To make change, we should engage and encourage use the right side of the brain. This is art, expression, spirituality, connection…

(We actually have a course to develop Bardic skills on our website which culminates in producing a gift, a cell of song through sensory deprivation)

This isn’t about selling a course. Many of you are already talented artists, dancers, musicians, in which case dive deeper into earth based spirituality. Delve deeper into interconnection and let that infuse into your art. Listen to indigenous voices as modern people, not as nations stuck in a box of one particular moment in time.

We shared a simple ceremony and talked after the event, and there was an exchange. Not just a physical exchange, but something quite deep, something experiential and visionary. Through this experience I could sense that we were missing some ingredient, that we were expected to do another big piece of work, but there was something we currently didn’t have for it, a song that I couldn’t quite grasp… 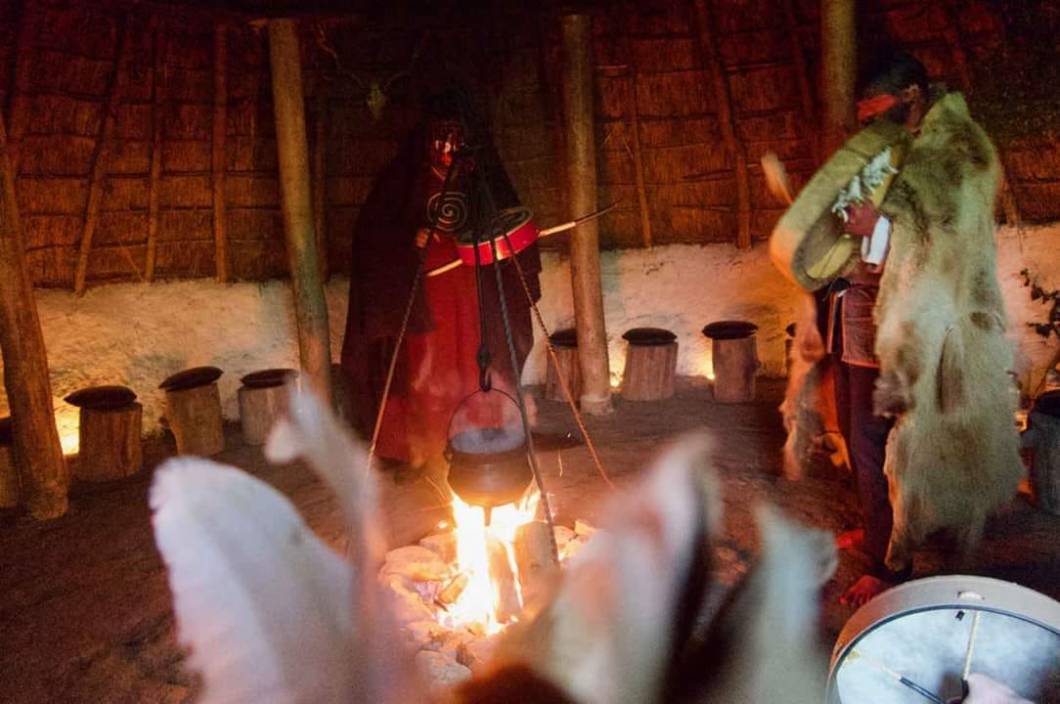 Simultaneously whilst meeting with Daiara Tukano in East London, other members of the BDO were deep in ceremony in Shropshire.

During their ceremony, Cerridwen was brought through to oversee the brewing of a potion, three drops of which brings forth song….

This was the missing ingredient. Not so much directly the Awen essence, but the prospect of bringing forth the missing song from the otherworld.
Now begins the work and experimentation.

These two events happened at roughly the same time…. Daiara gave us much knowledge that is directly applicable to our own indigenous spirituality. And whilst this was happening, Cerridwen gave us access to songs.

We will now spend time working with all this to firstly be thankful for the gifts that we have been given this beltane and also to learn how to use these gifts to create the most positive change in the world, for the good of all.

All things are connected.

Will you join us on the bardic journey, heart to heart, and hand in hand?